Bitcoin price climbed 6% in the 24 hours immediately after the release of the Consumer Price Index (CPI) before slowing down later in the day. At the time of writing, BTC is changing hands at $24,359.

The CPI is a measure of inflation in the U.S. that accounts for the price of a weighted average market basket of goods and services purchased by households. Changes in the CPI track changes in prices over time. In July the CPI increased 8.5%, still high but lower than the 8.7% rate that most analysts had predicted and an improvement on June’s 9.1% inflation rate. The June reading represented a four-decade high.

“With the CPI announcing earlier today that inflation has (at least for now) plateaued, crypto and equity prices quickly surged. The major marketwide price spikes happened in tandem with this announcement, and traders hope this good news continues”, Santiment reported. 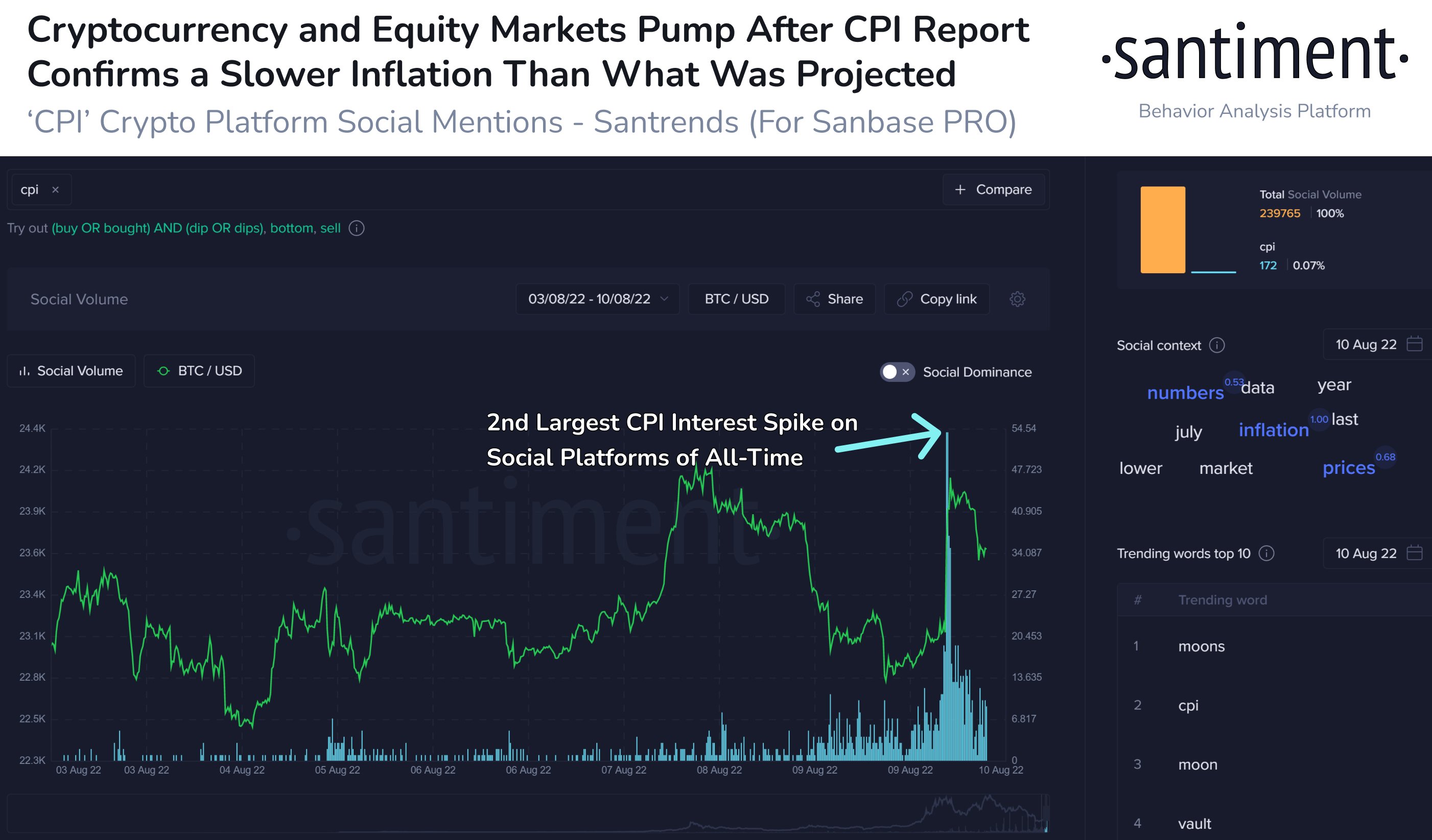 The July Consumer Price Index (CPI) report in the U.S. was sweet music for crypto investors. They sent the price of bitcoin higher minutes after the U.S. Commerce Department published the July inflation reading, which showed prices declining at a slightly lower rate than most analysts expected.

Bitcoin was recently trading just at roughly $23,850, up nearly 3% over the past 24 hours. The largest cryptocurrency by market capitalization had breezed past the $24,000 threshold earlier in the day and remained in the upper end of the range it’s occupied for the better part of two weeks. Markets were clearly feeling more hopeful the U.S. Federal Reserve was succeeding in its attempt to tame inflation without casting the economy into recession and could boost interest rates at a more moderate rate at its next meeting in September.

Altcoins also rose. Ether cracked the $1,800 mark for the second time in three days, increasing more than 8% over the previous day. The second-largest crypto by market cap has been gaining momentum even without the CPI news. The Ethereum blockchain is nearing the eagerly expected Merge, which will shift the protocol from proof-of-work to a less energy-sapping proof-of-stake model.

“Ethereum surged back over $1,880 after a positive CPI report Wednesday. This 2-month high in price came with a major influx of ETH transactions valued at $100,000 or more. This is happening in tandem with whale addresses appearing to be accumulating”, Santiment added. 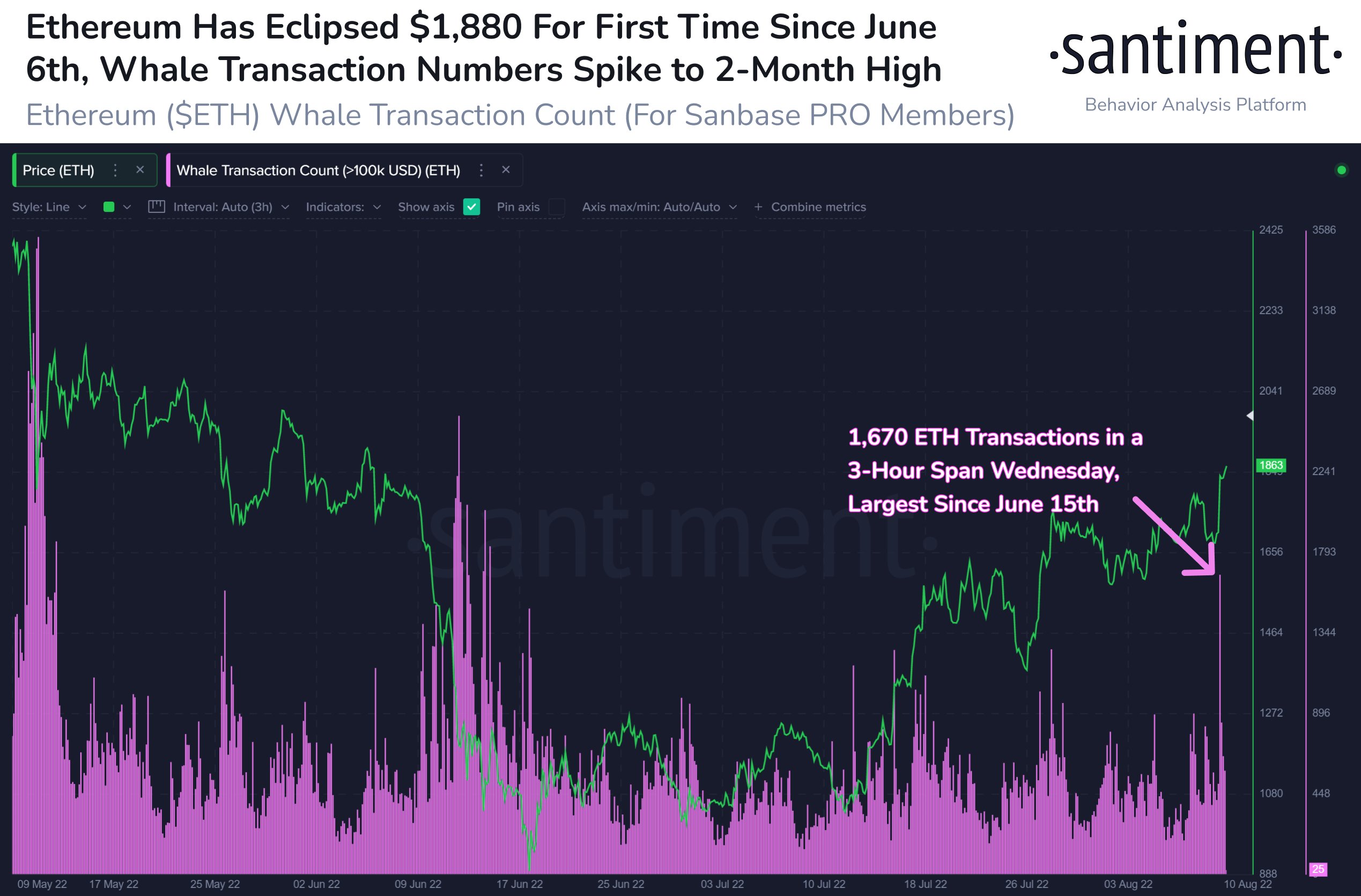 Most other major cryptos also were basking in the sunshine, with AAVE rising almost 14% and FTM and STORJ up more than 12% at one point. AVAX increased 5%. MATIC and LINK rose 3% and 5%, respectively. Near Protocol (NEAR) jumped 12% to a high of $5.97 after Coinbase (COIN) added the token to its listing roadmap, which shows assets the cryptocurrency exchange plans to add.

The overall cryptocurrency market cap stands at $1,149 trillion, and Bitcoin’s dominance rate is 40.1%.