Bitcoin’s trading volume hit its highest level since mid-June to stand at $42.68 billion

Despite Bitcoin’s significant corrections in 2022, the asset is witnessing increased investor activity. In this line, Bitcoin’s trading volume has risen steadily as the flagship cryptocurrency appears to meet its expectations of being a safe haven asset in the high inflationary environment. In particular, as of September 29, Bitcoin’s trading volume hit its highest level since mid-June to stand at $42.68 billion, on-chain data by Santiment indicates. 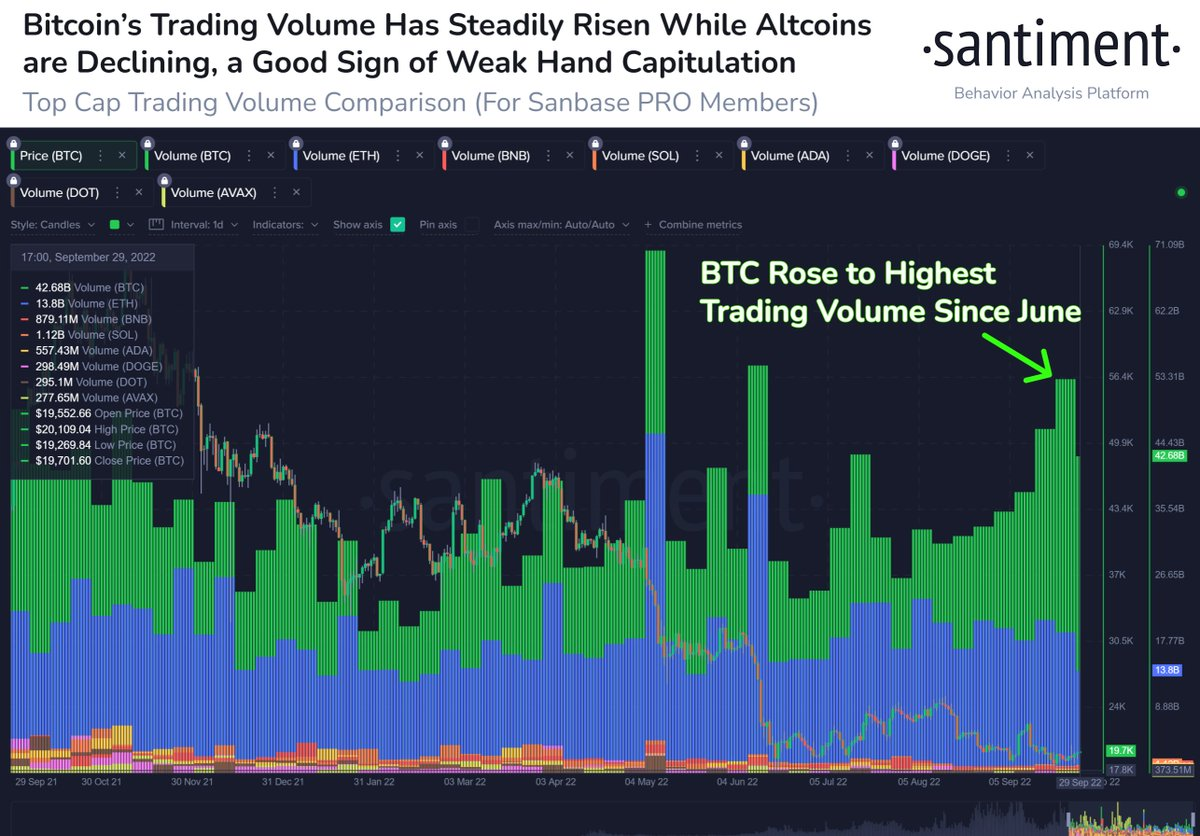 Although Bitcoin trading volume is surging, the activity has failed to reflect on the asset’s price which continues to be outweighed by the prevailing macroeconomic factors like high inflation and increasing interest rates.

At the same time, most global fiat currencies are stumbling against a rampant United States dollar. Therefore, investors appear to rush to dump the fiat currency with Bitcoin viewed as a hedge. Also, a section of investors is attempting to profit from arbitrage.

Investors in the United Kingdom and the European Union are selling their pounds (GBP) and euros (EUR) at record numbers to purchase Bitcoin. This is after the pound fell to historic lows triggering a record spike in the GBP/BTC trading volume. The Bitcoin trading volume partly complements the asset’s founding principles of thriving in high inflationary conditions.

It is worth pointing out that investors might not intend to hold the Bitcoin for long if the volume was triggered due to the falling fiat currency values. When fiat currencies underperform, investors usually turn to cryptocurrencies to buy dollarized assets and bypass the traditional banking system.

Furthermore, the explosion of Bitcoin trading volume against fiat currencies highlights the asset’s potential. Proponents have touted cryptocurrency as a better alternative to fiat currencies and gold due to the limited supply feature.

In the meantime, Bitcoin is attempting to rally past the crucial $20,000 level. By press time, the cryptocurrency was valued at $19,300, with losses of about 1% in the last 24 hours.

Bitcoin to surpass $12 million by 2031 fuelled by collapsing dollar

Robert Breedlove, the founder of crypto investment firm Parallax Digital has suggested that Bitcoin (BTC) stands a big chance of recording a significant spike in the future, mainly driven by a drop in the purchasing power of the dollar.

According to Breedlove, his model places Bitcoin to trade at $12.5 million by 2031, a value equivalent to $1 million based on today’s purchasing power, he said during an appearance on the Altcoin Daily podcast on September 13. “I’m going to stand by that prediction today. I know the DXY [US dollar index] is way up recently but I sort of expect this thing to get volatile before it breaks down. If that is the case, then I have a matching Bitcoin price prediction of $12.5 million US per Bitcoin by the year 2031.”

He notes that the dollar is hyperinflated and potentially dropping to zero by 2035. “A caveat there is that that would only be a $1 million Bitcoin price in 2020 dollars, so the purchasing power of 2020 at the time I made the prediction would be the equivalent of $1 million US in Bitcoin,” he added.

Furthermore, Breedlove noted that once the dollar hits its bottom of zero, there will be no need to price Bitcoin.

Whales and retail investors starting to accumulate the first cryptocurrency

​Interestingly, the former hedge fund manager’s sentiments come during a period when the dollar is running rampant against most global fiat currencies. Notably, the situation appears to work in Bitcoin’s favor as more investors ditch their local currencies to invest in Bitcoin. Consequently, Bitcoin has registered a spike in trading volume, culminating in a high of $42.68 billion as of September 29.