The Bitcoin price rose 1.4% on moderate volume as the price reached as high as $19,670. BTC began a steady ascent early Monday, rising for five consecutive hours before retracing. At the time of writing, BTC is changing hands at $19,530.

Investors continued a cautious return to riskier assets, sending bitcoin and other cryptos higher for a consecutive day. But how long the mini-surge lasts remains to be seen. BTC crossed $19,600 at one point but appeared likely to continue trading in its recent narrow range. The largest cryptocurrency by market capitalization was recently trading above $19,500, up about 1.4% over the past 24 hours, swept up in a wider, likely temporary embrace of more traditional markets.

Bitcoin and ether started the week in positive territory as risk assets of various stripes rose. Macroeconomic data will be relatively light this week, although markets will be eyeing Wednesday’s inflation data from Great Britain and U.S. housing starting on the same day.

“Bitcoin’s long-term metrics have shown encouraging signs of a turnaround for a few months now, despite prices being stuck in the mud. Our latest insight touches on the network’s losses, & the low discussion rates while altcoins look for quick pumps”, Santiment reported. 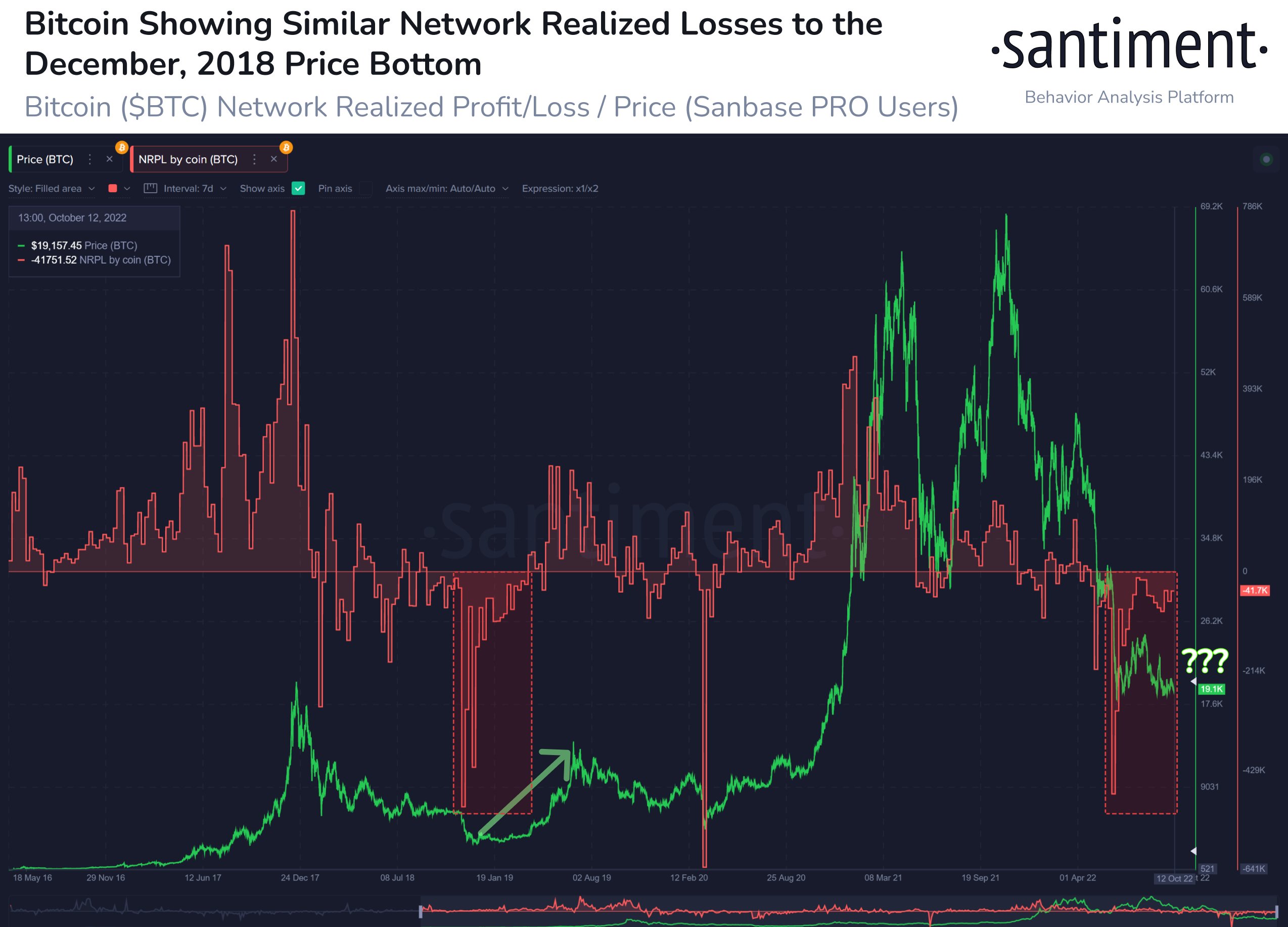 Ether price increased 1.3% as the second-largest cryptocurrency by market capitalization continued to hover above $1,300. ETH pushed higher during the 13:00 UTC (9:00 a.m. ET) hour before declining and reaching as high as 1,337. ETH is up approximately 0.01% since Oct. 8, when the asset became deflationary for the first time since the Sept. 15 Ethereum Merge upgrade from proof-of-work to proof-of-stake.

Other major altcoins spent much of the day in the green, with ATOM and MATIC among the biggest gainers for cryptos with at least a $1 billion market cap, each rising about 5%. The top altcoin gainers recently were Polymath Network’s POLY and Injective Protocol’s INJ, which rose 27% and 13%, respectively. The laggards on the day were Index Chain’s IDX and XYO Network’s XYO.

“Quant has been one of the major outliers in crypto, enjoying a +133% pump the past five weeks. However, the price has dropped -7% after a spike in whale $100k+ transactions. QNT was already showing signs of returning to exchanges since Thursday”, Santiment reported. 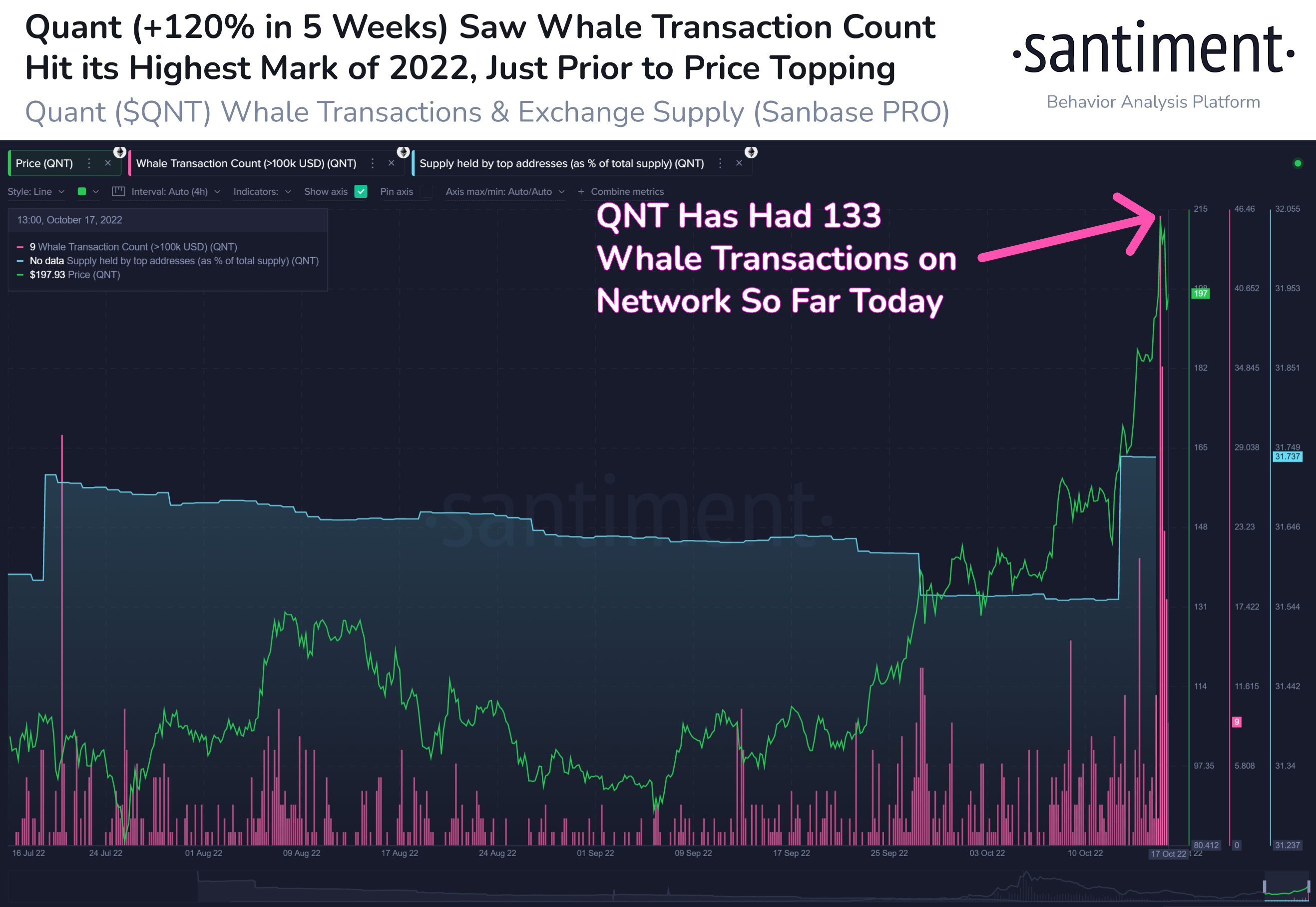 Crypto prices dovetailed with equity market increases as the tech-heavy Nasdaq and S&P 500, which has a heavy technology component, jumped 3.4% and 2.6%, respectively, amid continued worries about inflation and the future of the global economy. Investors will be scrutinizing third-quarter earnings, which are now in full swing with Bank of America, the second largest bank in the U.S., reporting an 8% decline in profitability on Monday and Goldman Sachs and Tesla among the global brands scheduled to report later this week.

The fallout from the collapse of now-bankrupt crypto hedge fund Three Arrows Capital continued with the liquidators in the case seeking authorization to serve subpoenas to the firm’s co-founders Su Zhu and Kyle Davies by alternate means, according to a court filing. The Commodity Futures Trading Commission (CFTC) and the Securities and Exchange Commission (SEC) are now examining whether the firm violated rules by misleading investors about its balance sheet and not registering with the two agencies.

Markets were buoyed on Monday by the U.K.’s new finance minister, Jeremy Hunt, abandoning much of his predecessor’s mini-budget. The pound jumped more than 2% on the back of the news to trade at $1.14. The mini-budget in late September had proposed £45 billion ($51 billion) in unfunded tax cuts, which in the weeks since had driven the pound to its lowest level against the U.S. dollar since the mid-1980s.

Despite Cardano (ADA) is declining in value, the frequency and volume of ADA transactions increase

Markets also rallied on a better-than-expected earnings report from Bank of America Corp. on the back of higher income from the rise in interest rates. The shares jumped more than 6%.
Earnings season for financial firms focuses on Wall Street, and the next major release is due from Goldman Sachs Group Inc.