A day before the U.S. Thanksgiving weekend, Bitcoin price was trading up more than 2%

Bitcoin price started celebrating the U.S. Thanksgiving holiday weekend a little early, rising 2.4% as investors savored the latest encouraging signs that the U.S. central bank would soon be ratcheting back its monetary hawkishness. The largest cryptocurrency by market capitalization was recently trading at about $16,689.

With a couple of minor glitches, BTC has remained steadfast at over $16,000 even as the fallout from crypto exchange FTX’s collapse has widened.

Ether recently changed hands at $1,183, up 4.4% from Tuesday. Solana rose 15.2% to $14.34 in a reversal of a few days of steady losses. The once fourth-ranked cryptocurrency by market cap was one of the hardest hit by the collapse of FTX as sister firm Alameda Research held large quantities of the token in its reserves. The token is still down 56% since the start of the month.

“Ethereum’s active shark & whale addresses continue accumulating with prices less than a quarter of their All Time High levels a year ago. In Oct/Nov 2020, these 100 to 100k ETH addresses assisted in pushing ETH to a +50% price rise over 5 weeks”, Santiment reported. 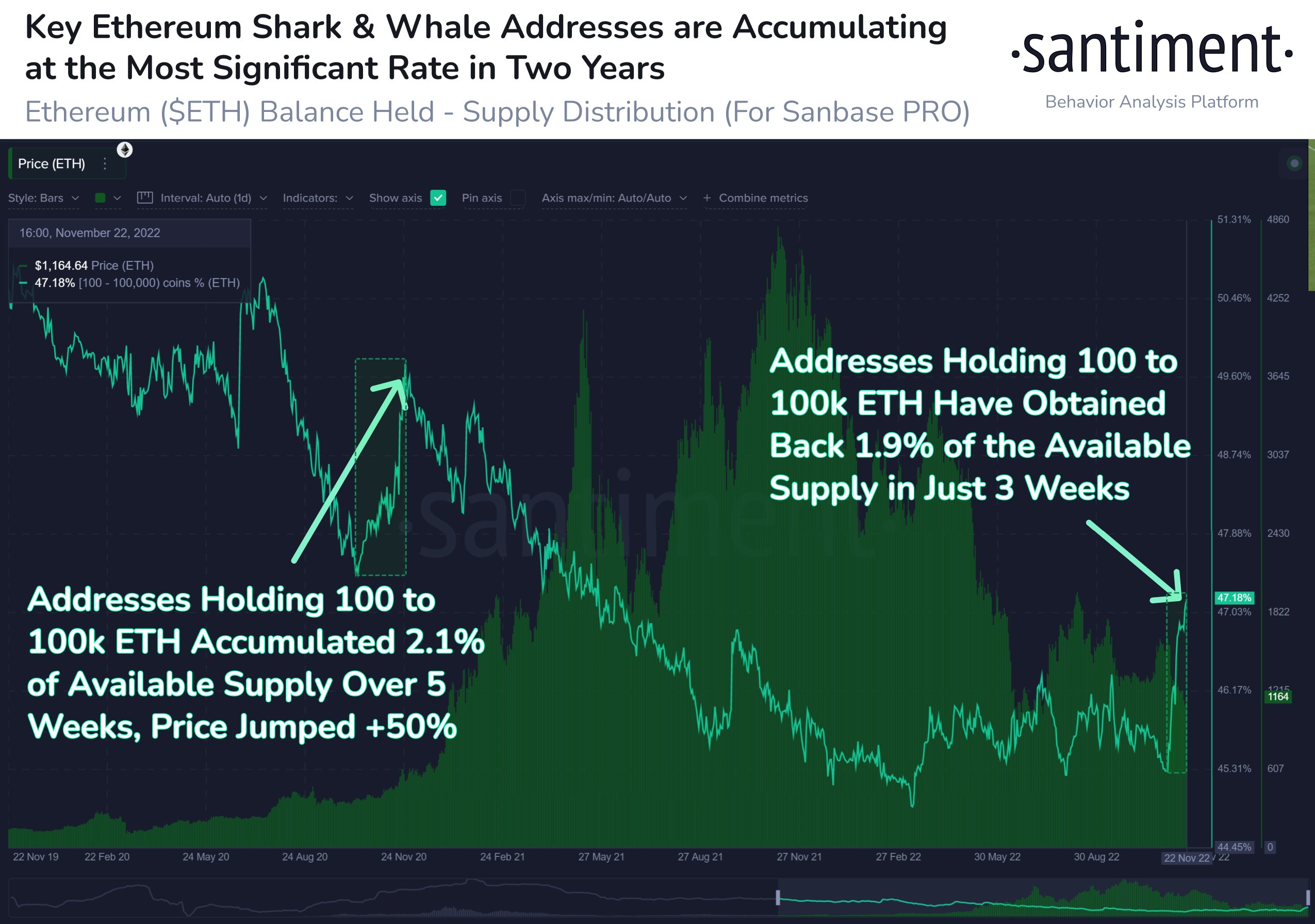 Litecoin continued its price run, gaining 12.1% to trade at $7.98, marking gains of 37.7% for the past seven days. Litecoin’s recent success may be attributable to investors turning to stability in a volatile market. BNB, the native token crypto exchange Binance Global Inc.’s blockchain, BSC, also rose 12% to $298.42, the highest price it has reached since just after FTX declared bankruptcy. Binance chief executive officer Changpeng Zhao played a central role in FTX’s collapse. In early November, he announced Binance was liquidating its positions in FTX’s native token, FTT, contributing to a bank run on the token.

Most other significant cryptos were recently in the green, with LINK and UNI rising more than 5% and 3%, respectively.  Crypto prices dovetailed with equity markets, which closed higher Wednesday after minutes from the Federal Open Market Committee (FOMC) revealed that bank officials might be receptive to slow interest rate increases from their recent diet of 75 basis point hikes. The tech-focused Nasdaq climbed about 1%, and the S&P 500 and Dow Jones Industrial Average rose a few fractions of a percentage point.

According to the minutes, Fed officials agreed they would soon begin decreasing the speed of interest rate rises amid concerns about a growing threat of a recession. The officials said slowing this pace would give them time to evaluate the effect the past few months of interest rate rises have already had on the economy, as these take some time to significantly impact the economy.

The Fed has been raising interest rates since March this year to slow inflation, from near zero to a 15-year high of 3.75% to 4%. The Fed has signaled that it will continue to raise rates until inflation reaches a target range of 2%.

Officials said that the ultimate interest rate is higher than they had anticipated, with recent statements indicating they could exceed 5%. They also said they see few signs of inflation abating, though the consumer price index showed inflation was running at 7.7% in October, down from 8.2% in September.

Bitcoin price surpasses $44,500, where will the rally go?