Bitcoin price was little changed amid mixed results from the other top 10 non-stablecoin cryptocurrencies following a relatively muted few days of trading over the Thanksgiving weekend in the U.S. At the time of writing, BTC is changing hands at $16,110.

Bitcoin price fell 0.2% to $16,439, while Ether fell 0.9% to $1,208. Investors fretting another post-FTX-related price plunge in crypto markets could otherwise take heart at bitcoin’s resilience, although the largest cryptocurrency’s ability to hold its perch over $16,000 for yet another few days hardly suggests a more permanent upturn is approaching, several analysts have said. BTC was recently trading at about $16,500, roughly flat for the past 24 hours and about where it stood Wednesday when the U.S. began its Thanksgiving holiday celebrations.

“Just 6.95% of Bitcoin is sitting on exchanges. There had already been a gradual shift in BTC moving into self-custody going back to BlackThursday (Mar 2020). But with the FTX fallout, this trend has accelerated”, Santiment reported. 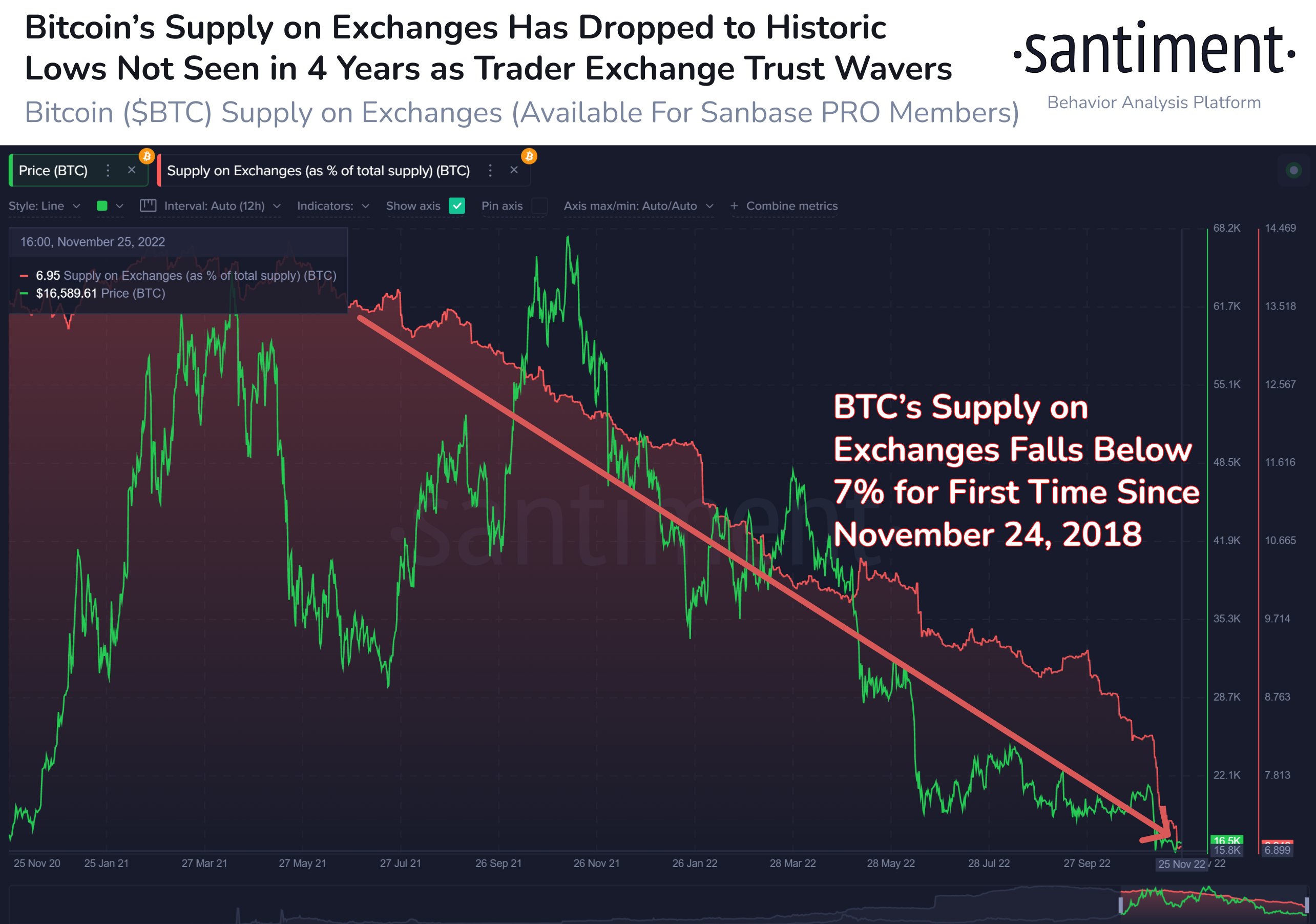 Memecoin Dogecoin was the standout performer as a longtime token advocate and new Twitter Inc. boss Elon Musk used the platform to announce a significant development for his electric car company Tesla Inc.

Dogecoin was the only token to see double-digit gains, rising 11% to $0.098 — near its highest point in almost three weeks. These gains came suddenly after Musk announced that the “Tesla team just completed a 500-mile drive with a Tesla Semi weighing in at 81,000 lbs!” Dogecoin’s fortunes are often linked to that of Musk and his companies; the meme coin also saw significant gains when Musk’s purchase of Twitter was confirmed, for example. Copycat token Shiba Inu also posted more significant gains than any other top 10 token, rising 2.9% to $0.000009286.

BNB fell 1.2% to $307.69 but is still up 16.4% over the past seven days. This comes as Binance released its proof of reserves on Friday to provide increased transparency over user funds amid the heightened industry scrutiny following the collapse of Bahamas-based exchange FTX.com. Litecoin saw the heaviest losses, falling 1.9% to $7.03. However, it has still proven to be one of the best-performing significant tokens as it gained roughly 36% in November amid the extreme market volatility since the collapse of FTX. Litecoin is expected to undergo its third mining reward halving in eight months, which will slow the pace of the token’s supply by half.

While it was little changed on Monday morning, XRP rose 9.7% to $0.39 in the past seven days of trading as the date approaches for both parties to file summary judgments in the U.S. Securities and Exchange Commission’s (SEC) lawsuit against Ripple Labs Inc. — whose payment network is powered by XRP. Both parties are set to meet on Dec. 2 to discuss case redactions.

A record $9.1 billion was spent on Friday as part of the annual “Black Friday” sales, an increase of 2.3% over previous years. These are annual sales held on the Friday after Thanksgiving, which has become a major event on the retail calendar in the U.S. and has proven so popular as to have spread to other countries that do not typically celebrate Thanksgiving on that day or at all.